The Shop at CadreMen Press

“What Is Inside Of You?” By Kirk Hunt

“Woe to you, scribes and Pharisees, hypocrites! For you are like whitewashed tombs which indeed appear beautiful outwardly, but inside are full of dead men’s bones and all uncleanness.   Even so you also outwardly appear righteous to men, but inside you are full of hypocrisy and lawlessness.”

Jesus’ criticism of the Pharisees is sharp and pointed.  Our Savior called the elite religious leaders hypocrites.  Their sanctimonious words and ceremonies were a thin veneer over their sinful actions, thoughts and intentions.  All men and women are containers of something.  What is inside of you?

In those days, a tomb would be beautiful from a distance, but up close it would reek of death and decay.  Un-embalmed bodies would be placed on a shelf inside, then left to decomposition to run its course.  A carefully crafted and expensively finished sepulcher would be a shell around corruption and putrefaction.

In Matthew 23, Jesus is not criticizing the occasional harsh word or stray thought.  Instead, He rebukes sanctimonious words that end in naked greed, lust and exploitation.  Jesus does not value high-form ceremonies that are followed by base-form lives, devoid of any attempt at true holiness.

In these days, men and women speak high-sounding words, but their actions too often reveal gutter-level intentions.  “What you do speaks so loud that I cannot hear what you say.”  Disciples of Jesus Christ, most of all, must make sure their actions match what they preach.

Think:       Inside of my heart, mind and soul am I full of God’s Word, or something else? 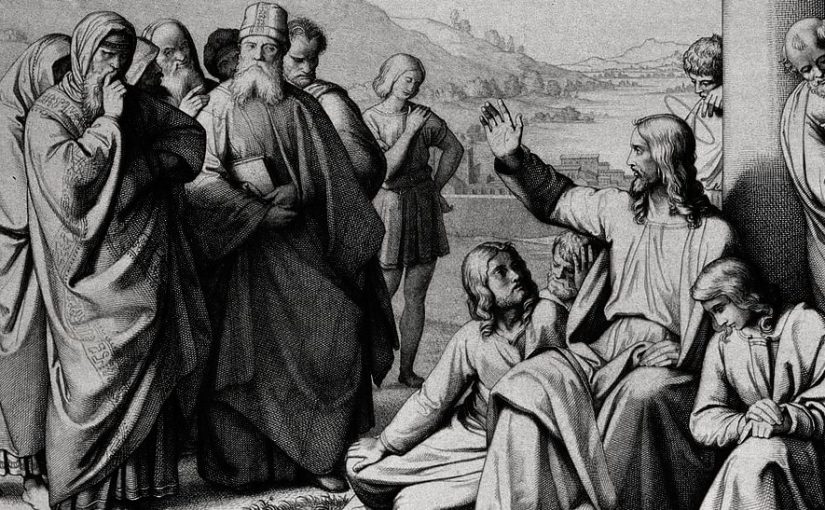 “Observe And Do” By Kirk Hunt

Then Jesus spoke to the multitudes and to His disciples, saying:  “The scribes and the Pharisees sit in Moses’ seat.  Therefore whatever they tell you to observe, that observe and do, but do not do according to their works; for they say, and do not do.”

Jesus observed and commented.  He clearly and plainly told the majority of folk that their religious scholars and leaders preached one thing but clearly practiced a different thing.  How is it possible to mess up, “Observe and do the right things”?

Was Jesus critiquing pagan Romans?  No.  Was Jesus rebuking Roman collaborators or prostitutes?  No.  Jesus criticized the very people who should have known better than anyone else.

The Pharisees preached righteousness and adherence to the law, but their motivations however were corrupt or self-serving (Matthew 23:5).  Of course, these high minded religious experts were not above exploiting the poor or vulnerable in the name of profit (Matthew 23:14).  In general, the Pharisees did the easy part of looking sanctimonious, but did not do the hard part of living righteously (Matthew 23:23).

Living righteously before God and man is easier said than done.  That is why the Holy Spirit helps those men and women who seek Him.  Religious law can only help you realize how sinful you are.  It takes God’s spirit and grace to fulfill the law by living a sanctified life.

Take a good look at how you actually live.  Does your life match what you preach (or say you believe)?  Seek the Holy Spirit and ask Him to help you live out what you say.

Think:       Observe yourself.  Are you really doing the hard work of living righteously?

“Are You A Brood Of Vipers?” By Kirk Hunt

But when he saw many of the Pharisees and Sadducees coming to his baptism, he said to them, “Brood of vipers! Who warned you to flee from the wrath to come?

The Pharisees and Sadducees were the religious leaders and Scriptural (Torah) scholars of the era.  John the Baptist, as the son of the Temple Priest, Zacharias, likely knew many of them personally.  One must wonder why John deliberately called the religious elite “vipers.”

It is easy to criticize leaders, right or wrong.  In too many cases, the revelation of bad behavior and villainous schemes of leaders is the source of the criticism.  In too many other cases, the mismatch between the words spoken from the lectern, and the lives led in the streets, is the reason for disdain.

Consider the moneychangers (merchants) in the Temple.  The violation of the Mosaic law, and the sanctity of that holy place, was tolerated because the High Priest and other Temple officials were being paid.  A clear violation of the letter and spirit of the Law they claimed to love so much.

We associate snakes with sin, evil and deception.  By calling them Vipers, John deliberately references the poison that some snake breeds use to better devour their prey.  There is no subtleness in John’s message.

Consider the Christian life you live.  Does it match the Christian Gospel you preach?  I pray that men and women see you as a child of God and not as a walking snake.

Pharisees In The Gospels

But some of the sect of the Pharisees who believed rose up, saying, “It is necessary to circumcise them, and to command them to keep the law of Moses.”

The Gospels clearly record how this ancient Jewish sect opposed Jesus and His message of grace and forgiveness.  At best, the Pharisees were judgmental, harsh, unforgiving, graceless and snobbish.  Except for the fact they accepted salvation from Jesus, I pray you are not like them.

After the Holy Spirit fell on the Gentiles, the converted Pharisees wanted to impose the Mosaic Law (and probably all of the rabbinical commentary and regulations) on these new Christians.  Instead of embracing and promoting the new freedom and fresh grace of Christianity, they sought to impose old thinking and older rules.  Thankfully, Paul, Peter and the Apostles blocked their attempt to weigh down the Gospel with inflexible directives and man-made regulations.

Unfortunately, the Pharisee way of thinking did not die out before 100 AD.  A rules-laden, suffocating approach to the life-giving Gospel of Jesus is still with us and operating in the modern Church.  Opposition to the modern Church can largely be linked to Pharisee-like thinking and practices.  That should not be a surprise to saint or sinner.

Anytime non-Biblical rules, regulations or interpretation trumps the Gospel itself, you have a Pharisee-like problem on your hands.  Living out the Gospel of Jesus Christ is difficult enough.  Do not let anyone, including you, write-in additional rules and regulations.

This devotional is a ministry of https://devotionals.cadremenpress.com.